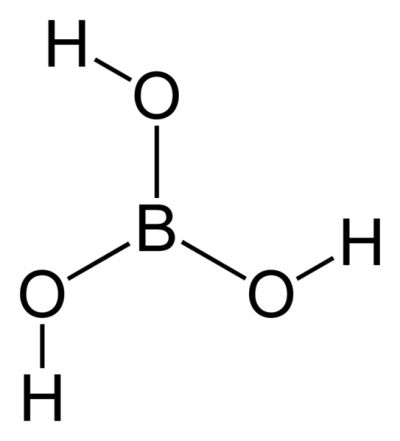 A water-soluble white or colorless crystalline compound, used as an antiseptic and preservative and in fireproofing compounds, cosmetics, cements, and enamels.

A water-soluble white or colorless crystalline compound, used as an antiseptic and preservative and in fireproofing compounds, cosmetics, cements, and enamels.

Introduction
Boric acid, also called boracic acid or orthoboric acid or Acidum Boricum, is a weak acid often used as an antiseptic, insecticide, flame retardant, in nuclear power plants to control the fission rate of uranium, and as a precursor of other chemical compounds. It exists in the form of colorless crystals or a white powder and dissolves in water. It has the chemical formula H3BO3, sometimes written B(OH)3. When occurring as a mineral, it is called sassolite.

It can be used as an antiseptic for minor burns or cuts and is sometimes used in dressings or salves or is applied in a very dilute solution as an eye wash. (1.5% solution or 1 tbsp per quart of boiled water has been suggested for the latter.) As an anti-bacterial compound, boric acid can also be used as an acne treatment. Boric acid can be used to treat yeast and fungal infections

Boric acid is used in nuclear power plants to slow down the rate at which fission is occurring. Fission chain reactions are generally driven by the amount of neutrons present.

In the jewelry industry, boric acid is often used in combination with denatured alcohol to reduce surface oxidation and firescale from forming on metals during annealing and soldering operations.

It is also used in the manufacturing of remming mass, a fine silica-containing powder used for producing induction furnace linings and ceramics.

– Borates including boric acid have been used since the time of the Greeks for cleaning, preserving food, and other activities

– TBE buffer is widely used for the electrophoresis of nucleic acids and has a higher buffer capacity than a TAE Buffer. It can be used for DNA and RNA polyacrylamide and agarose gel electrophoresis

– It is used in pyrotechnics to prevent the amide-forming reaction between aluminium and nitrates. A small amount of boric acid is added to the composition to neutralize alkaline amides that can react with the aluminium

– Boric acid is added to salt in the curing of cattle hides, calf skins and sheep skins. Used in that way it helps to control bacteria development and also aids in the control of insects